Menu
April 5, 2021 4 min read
This article was translated from our
Spanish edition using AI technologies. Errors may exist due to this process.

The wireless connection between the human brain and a computer , which a few years ago seemed like a distant science fiction utopia, is now a reality. The feat is the work of the team of neuroscientists of the BrainGate organization, dedicated to the development of technologies for patients with neurological diseases or loss of limbs .

The study , published this week in IEEE Transactions on Biomedical Engineering, explains that BrainGate conducted the first test of a wireless brain-computer interface ( BCI ).

This technology works through an electrode array or chip implanted in the motor cortex of the human brain. The chip captures the signals emitted by neurons and sends the data to a computer capable of decoding them and converting them into instructions . These commands are transmitted without the need for a cable connection to external devices. Thus, patients suffering from paralysis can ‘write’ on a screen or manipulate a robotic prosthesis with their thoughts alone .

“The signals are recorded and transmitted with similar fidelity , which means that we can use the same decoding algorithms that we use with wired equipment. The only difference is that people no longer need to be ‘tied’ physically to our equipment, which opens up new possibilities in terms of using the system, “ said John Simeral , lead author of the study and assistant professor of engineering at the Brown University .

Until now, BCIs relied on wires to connect the brain’s sensor array to computers. Of course, this limits its use to a certain space and requires expert supervision.

BrainGate researchers succeeded in replacing all that wiring with a small 5-centimeter transmitter weighing close to 40 grams . East it is placed on the top of the head and is connected to the chip installed inside the brain to pick up neural signals. 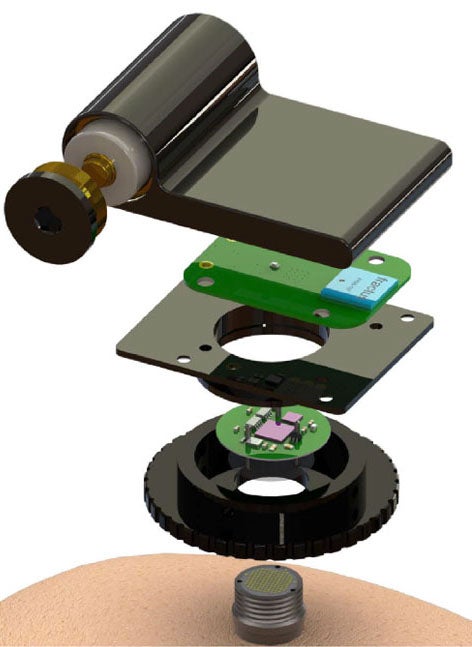 The wireless BCI device used in the study was developed in the laboratory of Arto Nurmikko, a professor at the Brown University School of Engineering. Image via Brown.edu .

Testing of the new wireless BCI technology was performed on two men aged 35 and 63 with spinal cord injuries. Participants were able to use the system at home, in contrast to other similar laboratory trials.

“We have shown that this wireless system is functionally equivalent to the hard-wired systems that have been the gold standard in BCI performance for years ,” Simeral noted.

Neuroscientists at BrainGate , based in the United States, say that the wireless brain-computer connection is a breakthrough in the field of BCIs . This implantable technology brings the organization closer to its primary goal, which is to help patients with neurological diseases , injuries, or limb loss regain communication, mobility, and independence.

Lower bandwidth wireless devices have been reported before, but this is the first broadband system to transmit the full spectrum of signals recorded by an intracortical sensor.